Sawston Scene is the village magazine for Sawston, Cambridgeshire. (Find out more about the village on Wikipedia.)

The aims of the magazine are:
• to be informative
• to promote community spirit within Sawston
• to be non-political, non-sectarian and non-profit making.

The first issue was published in April 1970 by a group of young mothers who were new to the village. One of them was Jean Osborne, who is still on our production team.

S C H E D U L E
The magazine is published every two months: April–May, June–July, August–September, October–November, December–January, and February-March. We print 1,300 copies of each issue: there are around 3,300 households in Sawston and many people pass them on, so we reckon that we reach about half the village.

O N   S A L E
You will find the magazine on sale in the High Street at Spar, Sawston Post Office, Searles the butcher, Cambridge Building Society and Mary’s Greengrocer, and in the Challis Garden, and at Londis in Falkner Road, Single copies cost £2, and you just take one and drop your money in the box. At Spar and Londis you can pay with the rest of your shopping, using a card.

You’ll see our posters go up along the high street as soon as a new issue is on sale.

S U B S C R I P T I O N S
You can subscribe for just £5 for six issues and have copies delivered to your door (if you’re in Sawston or Pampisford) by our brilliant team of distributors. Subscriptions run from the April–May issue, and there are always forms in the February–March issue, and at Sawston Post Office. To subscribe at any other time, contact our subs manager or subscribe online.

If you’re outside the village, we can send your magazines by post and charge this at cost. A postal subscription costs £14 (£15 online) for delivery within the UK.

To find out more, take out a subscription, or join our team of volunteers to deliver the magazine, contact our acting subs manager Beck on 562 871 or subs@sawstonscene.org

N O N – P R I N T    V E R S I O N S
If you find the printed version hard to read, please contact the editor as we may be able to supply an alternative version or arrange for articles to be read and recorded.

F I F T I E T H   A N N I V E R S A R Y  I S S U E
The April–May 2020 issue celebrated our fiftieth anniversary. We had hoped to deliver to the whole village, but the coronavirus lockdown stopped the presses; we had just enough copies to get them to our subscribers, and to let the wonderful Spar in Sawston have a few spares to send out to elderly or vulnerable customers. Here is a PDF of the magazine free for everybody: 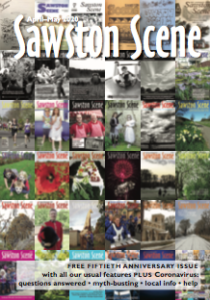